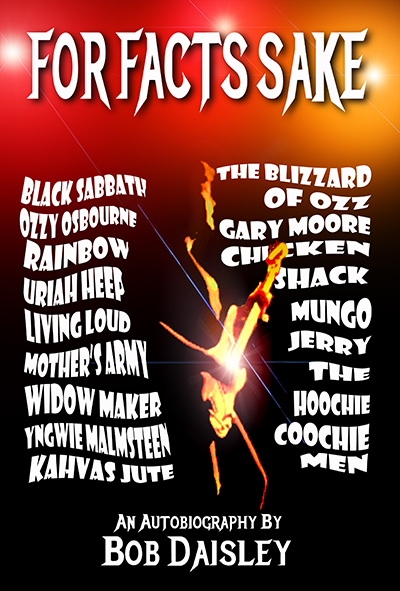 …in which the difference between collaboration and control is revealed. At the C&B office the other day, throwing darts at a photo of Sharon Osbourne, someone said "Bob's got his finger in the brain:" No, it was "finger on the membrane": Yeah, that's it. Operating the lyrical force field so that Ozzy becomes a living, talking, singing, creature. A slight of hand skilled enough to make a certain song on a certain later Oz album about "the death of love as the result of selfishness and control" that is sung by Ozzy, inspired by Sharon, written by Bob. Lyrics based on his own life and experiences but people believe they are someone else's, even their own. Depersonalization of a sort, a traumatic condition that Daisley knows something about. He is, of course, himself. Just as you are you. This as opposed to the control of another human to serve one's own porpoises, as Sharon Osbourne has demonstrated through fucking up what was one of the great rock bands in history. Its fucked up too, cause Bob and Oz were bros. Which is another life lesson to remember: bros before hos. It ain't even that Daisley hates Sharon, it's just that he ain't gonna give up the ice cream parlor that he built with his own two hand for nothin or nobody. There was the stuff with Rainbow. Also Widowmaker and Kahvas Jute are real rad bands. But it all seemed to lead up to haunted evenings at Clearwell Castle and Ridge Farm where the lyrical chemistry with Oz met Kerslake's kit demolition, and that little blond kid Randy harnessed enormous inter dimensional electro waves through a Les Paul and a polka dot V. Then came Uriah Heep, Gary Moore, Yngwie Malmsteen, Bill Ward, Eternal Idol era Sabbath, Monty Python quotes, thoughts on Buddhism, and the possibility that one person might still be in Motley Crue today because of Bob. There is also a very special video tape. A tape in the possession of Steve Vai, which features a fan with a rare talent. Kinky. What that talent is and more can be found out in this book. Buy it for your friends. Keep your wife up at night talking about how funny the fart stories are. Willkommem Bienvenue. Welcome. For fuck's sake, come on in and read this thing. Yes, not only are great tales of the mighty sphincter contained herein but finally the secret meaning behind the line, "Won't you ride my white horse?"